Startseite » Newsroom » Blog » Part 2 of the etventure hackathon: BRB, I’m off to save the world

Let’s make the world a better place. This was the tagline we chose for our first ever etventure hackathon. In part 1 of this series of blogs, we wrote about how the idea came about and explained what a hackathon actually is. Once all of the organizational hurdles were eventually overcome, we were finally able to make a start. In part 2, we will describe the intensive brainstorming and development sessions in the idyllic location in Mecklenburg-Western Pomerania, the boat trips at the crack of dawn and the battle with elusive internet access. 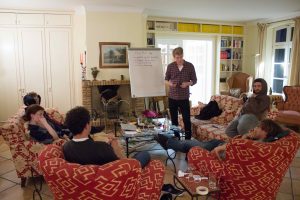 We had informed all of the hackathon participants about the topic (#letsmaketheworldabetterplace) a few days beforehand so that the team had been warned. On the Friday evening, once the house and grounds had been viewed, the rooms had been assigned and home-made pizzas had been put in the oven, the idea phase began. Each participant was to write – and draw out, if applicable – one or two ideas on a piece of paper. The idea had to be presented in such a way as to make it easily understandable, so that the others would immediately know what it was about. After this had happened, all the team members cast their votes by placing a small, round sticker on their preferred idea. During this phase, no consideration was given to feasibility, expansion possibilities or market potential.

The ten ideas that received the most votes were then presented by the people who submitted them. The ideas were presented in short, very entertaining pitches lasting 1–2 minutes. It quickly became apparent that nobody was there to mess around. The presenters pulled out all the stops for their pitches. There were laboriously designed idea sheets, and one idea actually originated from a participant’s pregnant girlfriend. The wide range of primary target groups included refugees, the environment, and etventure programmers. The presenters did everything they could to win the audience over with their ideas. Even just the fact that superb suggestions such as ‘Pirate Radio Anonymous’, Knowledge Sharing’ and the ‘Cow Emission Trade System’ didn’t make it to the final line-up demonstrates the overall high quality of the ideas.

In the end, the following five ideas were selected: 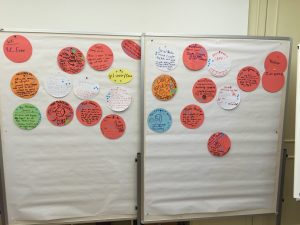 Lunch Randomizer: Four colleagues are picked at random and invited to go on a lunch date together

Localization App: Online tool for the management of language versions for internal products

After the Head of Technology – and author of this blog – had wisely withdrawn his own suggestion (the localization app) from the competition in order to preclude collegial bias from the outset, four relatively heterogeneous teams were quickly formed. Another brief explanation of the rules was provided:

All team members should be actively involved in the development process. Everyone can contribute something.

Explain what you are doing to the rest of your team – but also to the other teams.

No borders – no divisions

Talk about things with others, especially those who have a different area of expertise.

Absorb all the magic

Take time to check out the other projects and give them feedback.

Have fun with all of the teams – it’s not a competition.

Once the final concerns regarding feasibility had been resolved and even the ‘Tracking Cube’ team had found a creative solution to the problem of developing a hardware prototype without having any hardware components, the teams set to work. 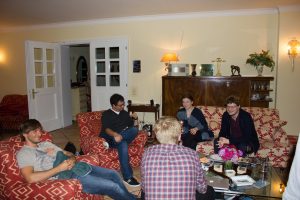 Full of enthusiasm, the teams entered the design phase. At this point in time, there were no indications that it was in fact a Friday evening or that this marked the end of a very strenuous working week for many of the team members. The house, which included a catering kitchen and a lounge with a piano, had plenty of space for all of the teams to work without being interrupted and to talk together about their ideas. The most difficult thing about this phase was the need to develop an extensive product vision against the clock while, essentially at the same time, reducing it to a prototype that could realistically be built within the extremely short timeframe. In particular, a lot of uncertainty was caused by the lack of experience regarding what can and cannot be achieved within the space of a few hours. By midnight, each team had put together a specific plan that they would present the next day. In line with their plans, they began to start working on the realization of the ideas. In some cases, there were even specific project schedules, which were set out in hours rather than days and weeks. In one case, a deadline of 4 am had been set. 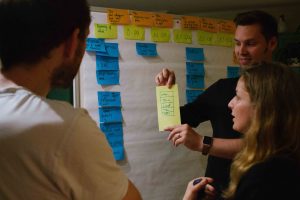 It became clear, particularly during the design phase, that the smaller topics, which were easier to get to grips with, were somewhat better suited to the hackathon because the execution phase could begin earlier. For more complex ideas, such as the Easy Form App, it was considerably more difficult to develop a specific product vision. It therefore followed that the development work began significantly later for this project than for the projects that were more clear-cut. 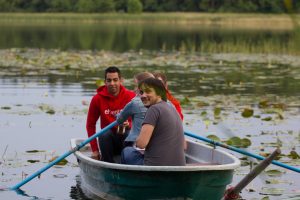 Some of the teams worked through until dawn. Not wishing to let the opportunity pass them by, they took a boat out onto the lake before sunrise. On the lake, they enjoyed an after-work drink and continued their intensive debates about the next development steps for their projects. Nothing much happened between the hours of 7 am and 9 am.

Shortly after 9 am, the participants came to the realization that although it was possible to carry on without much sleep, doing so without any food would be impossible. So an ample breakfast was dished up. It featured fried eggs (thanks again to the Operations Team for this!) and a wide range of bread roll fillings and spreads from a discount supermarket. After breakfast, there was a seamless transition into the second phase of development. By now, everyone was conscious of the time pressure. In the night, some time had been unnecessarily spent testing APIs (for anyone who isn’t a programmer, that’s Application Programming Interfaces) for prototype features that were later scrapped. The loss of each of these minutes was now being felt rather bitterly. In order to be able to put something presentable together despite the lost time, the teams were now turning to each other for support. Aside from a couple of slightly sarcastic remarks, this support was given freely. 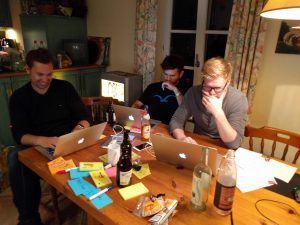 At around midday, all of the teams were optimistic about being able to meet the deadline of 7 pm. The general mood must have been a little too positive because the hackathon god decided to prepare a special treat for the participants – by intermittently interrupting the internet connection. For a development team that specializes in web services, this was essentially the worst catastrophe imaginable. We used every means at our disposal to sort out the problem, but even the IT administrator we had brought along was unable to solve it. After the hackathon, we found out that even the Chaos Computer Club wouldn’t have been able to solve the problem. A phone mast had fallen down and all the web traffic in the whole region was being diverted via an alternative mast. The resulting poor connection speed would have made a dial-up modem from the 1990s look impressive.

For this reason, it was necessary to find alternatives. The hardware team benefited directly from abstaining from the bells and whistles of the internet. Meanwhile, the Lunch-o-Rama team happened to find a stable 3G connection beneath a linden tree in the garden so they fine tuned their project outside in the glorious sunshine. A landline connection from the 2000s was shared between the other teams, who were each allotted a strictly rationed time period.

Now for the home stretch… In the third and final instalment, we will present the results of the etventure hackathon. Watch this space!