Part 1 of the etventure hackathon: Digital product ideas – made in “MeckPomm”

Part 1 of the etventure hackathon: Digital product ideas – made in “MeckPomm”

What better location for developing digital ideas than in Mecklenburg-Western Pomerania? This remote “protected space” in northern Germany is far removed from corporate organizational arrangements, processes and structures. What’s more, it is a calm, green region with lots of lakes and hearty food. A small team from etventure retreated to this region for the first ever etventure hackathon. In Part 1, we will write about how the idea came about, explain what a hackathon actually is, and recall the wide range of organizational challenges that faced us along the way.

Today’s special was written on the A-frame chalk board: Meatloaf with red cabbage. The lunch menu featured similar traditional German dishes, such as knuckle of pork and schnitzel with fried potatoes. You wouldn’t be able to find this sort of thing anywhere near our office in Berlin. We were in the middle of Mecklenburg-Western Pomerania (affectionately known as “MeckPomm”), at the “Haus Seeblick” inn. We were travelling to a weekend retreat that was to have a lasting impact on the way we saw the topic of product development at etventure. 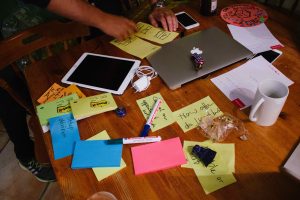 But let’s start at the beginning. In recent years, etventure has made a name for itself as a digital consultant and a company builder. One of the main reasons for this rapid development is the fact that etventure does not merely focus on corporate consulting. It also actively incorporates and develops different areas of digital innovation. In addition to partnering with international drivers of innovation, training management personnel for the digital sector and developing of its own startups, in all of these areas there is also a clear focus on the fast, hypothesis-driven execution of product ideas. Or, to quote the unofficial etventure philosophy: “Don’t just talk about it, do it!”

This is why etventure has invested a lot of energy in its own product development team in recent years. This team tests product ideas, builds prototypes and, within a relatively short space of time, launches them on the market as minimum viable products (MVPs). This makes it possible to receive user feedback as quickly and continuously as possible. We are very proud of the speed, professionalism and quality with which the ideas are developed and released. At the same time, there was an unspoken question: If its focus were not hindered by the constraints of daily business (projects running in parallel, remote working, the liaison with customers and stakeholders – which is entirely beneficial and necessary), what might this team be able to achieve?

Hackathon? Let’s do it! 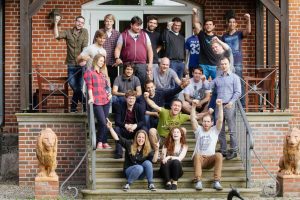 For this reason, we decided to hold our first official etventure hackathon. At the point of making this decision, not many of us had a detailed idea of what happens at a hackathon, let alone taken part in one. But the idea of being in small teams and working on selected ideas in a concentrated manner immediately received positive feedback. So we started making arrangements immediately. Since the hypothesis-driven approach is now completely embedded in etventure’s DNA, it is only natural that we proposed some hypotheses for this team event:

Without giving too much away too early on, at this point I must say that is was not possible to 100 percent validate all of these hypotheses. This preface is long enough already, so we will now concentrate on answering the following question in detail: How should a hackathon be organized for a team with a mix of specialisms, and, considering the stress of it all, is it worthwhile?

Definition of a hackathon: (translated from the German Wikipedia page)

A hackathon (portmanteau of the words “hack” and “marathon”) is a collaborative event for the development of software and hardware. The goal of a hackathon is to work together – within the timespan of the event – to create software products that are mutually useful, creative or entertaining. The participants often come from a range of areas within the software or hardware industry and they often work on projects in cross-functional teams.

Confirmation was given that etventure would once again live up to its reputation for always being open to new ideas – and that it would give its full support to this event despite none of the details having been defined by this point. The next step was to decide on a date and a location. Due to the situation with ongoing projects at that time, it was not possible to remove the whole product team from business operations for two full days. We therefore found a weekend that was convenient for the majority of the team. Once we had made this choice, it was clear that we would not set a topic that was directly related to any of etventure’s business projects. The intention was that the focus should be on the event itself. 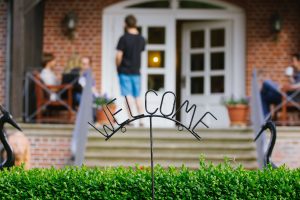 For psychological reasons and due to lack of sufficient space, we immediately ruled out our own facilities as a location. Instead, we tried to find a venue between our locations in Hamburg and Berlin. We wanted it be large enough for around 20 people, to have reliable Wi-Fi, and a view of a lake. Having a view of a lake was more of a “nice to have” feature – but it’s always good to leave a bit of room for negotiation.

Although there were a few locations that fulfilled our requirements, we soon found out that a very last-minute enquiry for just one weekend in the run up to the summer holidays is not the kind of booking request that goes down well in the holiday homes sector. With a little bit of luck and some skillful negotiation, we did find a very idyllic country house near the city of Schwerin – with a view of a lake. 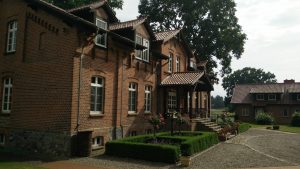 We now just needed to organize lift shares, the hardware that we needed to take with us, and a topic for the hackathon. Selecting the topic was the hardest task. In order to leave plenty of space for creativity yet at the same time to facilitate useful prototypes that add value, we ended up choosing a tagline that would not have been out of place at a Woodstock Revival festival or at the Love Parade: “Let’s make the World a Better Place.” #loveandpeace #flowerpower #longhair #morethanretro

Ultimately, the original ideas that flowed out of it proved that you don’t have to be a hippie to get your teeth into this topic. In Part 2, we will tell you more about these ideas. Stay tuned!