Startseite » Newsroom » Blog » “If you don’t digitalize now, you’re leaving value creation to your competition” – Philipp Depiereux, founder and CEO of etventure at the Bits & Pretzels

“If you don’t digitalize now, you’re leaving value creation to your competition” – Philipp Depiereux, founder and CEO of etventure at the Bits & Pretzels

“If you don’t digitalize now, you’re leaving value creation to your competition” – Philipp Depiereux, founder and CEO of etventure at the Bits & Pretzels

One of the focus topics of this years Bits & Pretzels (27. – 29. September 2015) was the Digitization of SMEs. The IHK-Panel “SMEs digital” at founder-festival Bits & Pretzels offered established businesses wide-ranged insights and contacts into the digital world.  Speakers such as Ilse Aigner, the Bavarian Minister of Economic Affairs, mentioned the importance of digitization for the whole economy. “Whoever does not digitalize now, will leave value creation to others” Philipp Depiereux, founder and CEO of etventure warned during his Presentation at Bits & Pretzels.

The founder-festival “Bits & Pretzels” is one of the largest founder events in Europe. Over the course of three days, german and international founders, investors, and politicians have the chance to exchange each other in Munich. Guest speakers included Runtastic CEO Florian Gschwandtner, GoButler-Investor Joko Winterscheidt, and Delivery-Hero CEO Niklas Östberg. But also international stars such as Evernote cofounder Phil Libin or Zendesk CEO Mikkel Syane shared their insights and learnings to 3,500 visitors. 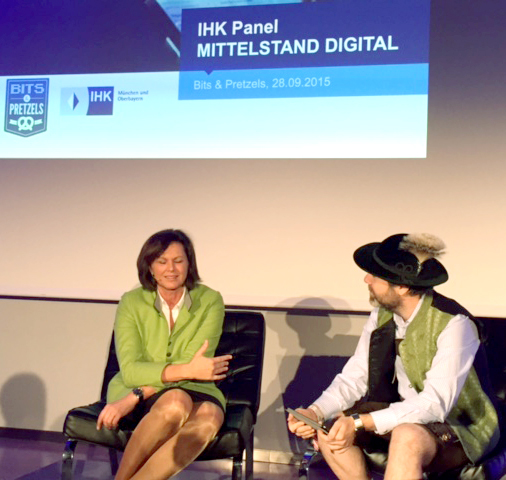 Ilse Aigner, Minister of Economic Affairs of Bavaria: Digitalization is often only discussed very briefly in the SME sector.

The IHK-Panel “SME Digital” dedicated itself on Monday (28. September 2015) towards the topic of digitalization in the SME sector and followed the question “what does digitalization mean for my SME business”. Definitely not broadband connection, Ilse Aigner, Minister of Economic Affairs stated. She opened the panel realizing that the discussion is often short-sighted. Frequently she is asked about the current state of broadband availability. While this is a fundamental part of the process, but the actual challenge is to understand what business models are possible through digitalization. She appealed to the SME sector not to wait for the development, but actively analyzing what digitalization can do for their firms. Ideally, firms and startups would combine their expertise to bring these business models to the new world.

Bavaria would like to become Digitalization leader. “We are investing 2 billion Euro over the next 4 years”

The full speech of Ms. Aigner at Bits & Pretzels

Philipp Depiereux, Founder and CEO of etventure also highlighted that the time is running out. Whoever doesn’t digitalize now, leaves value creation to others. Digitalization reaches every industry, only the hotdog stand remains offline.

All firms have to realize, competition in the context of digitalization rarely comes from the own industry. The players and companies who disruptively attack your own business models are established digital players like Google, Amazon or Apple but also innovative startups. 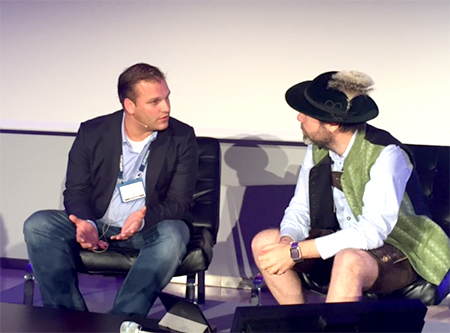 What the approach is like: The most important aspect of developing new business models is the user. “Only consider the user! Do not consider your own product span, your IT, do not even think about your IT-infrastructure.” Solely based on user feedback, testing and gathered data, decisions should be made and the development of business models be pushed forward. Philipp Depiereux suggests to host the first stages of development outside the firm. Innovative projects can internally, due to regulations guidelines and company structures, not be accomplished. Only successfully validated projects, so-called lighthouse projects can be reintegrated into the firm. “We need products with a clear user promise, that can be developed quickly and be sold on the market fast”, says Philipp Depiereux

To conclude, Philipp Depiereux states: “How can a digitalization process work inside a firm?”  I strongly believe due to the experience we have made, that if you try to do so within a firm, without a safe room, without a CEO at your hand and without the right professionals, you will not be able to do it.

The full speech from Philipp Depiereux at Bits & Pretzles