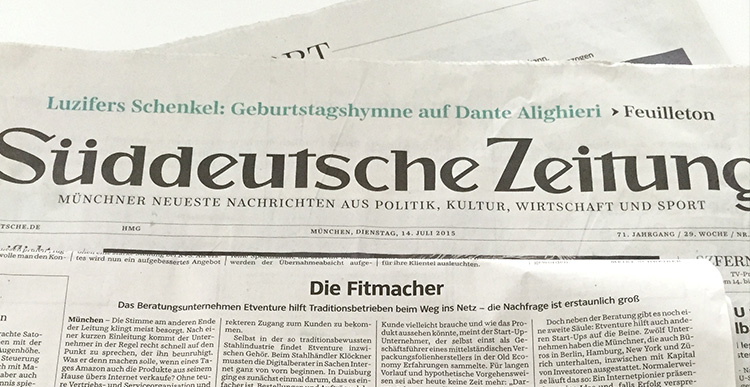 How are businesses supposed to react to the growing digital trend and what should they do if ‘someday amazon sells their products, without expensive distribution and service organization costs, significantly decreasing the price?’. In July, etventure Founder and Managing Director Philipp Depiereux met with SZ reporter Kirsten Bialdiga for a detailed interview about etventure’s digitalization philosophy.

Depiereux explains how ‘etventure’s digital experts guide a path into the future of digitalization and advise businesses on how to better reach customers in future’.

‘The digitalization focuses on speed and radical concentration on the user’, Depiereux says. Giving a few best practice examples such as innovation projects with an insurance group or the steel distributor Klöckner & Co, the article further describes what this means in concrete business cases.

etventure as a company builder: etventure’s second division is also given spotlight in the article. Altogether 12 startups make up the etventure portfolio right now. ‘Our investments have to function very early’ Depiereux is cited.

How this functions in detail and how digitalized Philipp Depiereux is personally can be read in today’s Süddeutsche Zeitung or online at sueddeutsche.de (in German).