The annual reception of the BVMW (German Association for SMEs) took place yesterday in Berlin. More than 3,000 people attended, including business players and representatives from politics, science and culture. In line with the event headline of “Overcoming challenges, utilizing opportunities,” they discussed what the future holds for SMEs. Philipp Depiereux, Founder and Managing Director of etventure, was invited as guest of honor.

Anyone discussing the future of the economy and the associated prerequisites will inevitably come across the topic of digitization. This was even evident from glancing through the list of speakers at the BVMW annual reception. Those speaking included Prime Minister of Estonia Taavi Rõivas, who is currently Europe’s youngest head of government and is a pioneer in the area of digitization, and EU Commissioner for Digital Economy & Society Günther Oettinger. Other keynote speeches were given by SME President Mario Ohoven, Federal Minister for Economic Cooperation and Development Dr. Gerd Müller and Federal Chairman of the German Green Party Cem Özdemir.

Blackspots are worse than potholes

“We are living in a digital revolution,” Günther Oettinger emphasized in his speech. Indeed, digitization is not just affecting individual industries, it is affecting entire swathes of the economy and of society. According to Oettinger, this also means that instead of talking about Industry 4.0, we should be talking about Economy 4.0 and Society 4.0. He expressed the need for German companies to be jolted in order to prepare themselves for the digital future. This is because in future, digital expertise will be a critical success factor. “Anyone who thinks they can enter the future without any digital skills – they won’t have a future.” Oettinger also said that the prerequisites for digitization needed to be in place. The key topic here was broadband expansion. He made his position clear: “We should sooner accept potholes than blackspots.”

Founding your own company in 18 minutes

Estonian Prime Minister Taavi Rõivas gave an impressive demonstration of what future-oriented politics and administration can look like. While young entrepreneurs in Germany still need to jump through numerous bureaucratic hoops, in Estonia, a company can be founded online within 18 minutes. 96 percent of Estonians now complete their tax return digitally. According to Rõivas, this only takes five minutes and the authorities will have processed it within one week or sooner. It is possible to vote online or by SMS and the Estonian constitution guarantees Internet access to its citizens. The positive effects of this thorough digitization are clear to see – this small Baltic country has the highest number of startups per inhabitant. It was hit hard by the financial crisis in 2007 but today, Estonia gleams with the lowest level of national debt in Europe. This is in part due to its positive reputation as an innovative location.

The German economy still has a lot of work to do. But digitization should be approached as an opportunity rather than a problem. The BVMW annual reception provided plenty of inspiration, goals and visions to help with this approach. At the event it became clear that large corporations are certainly not the only companies for whom digital transformation is a necessity. As the backbone and motor of the German economy, SMEs also need to make the transition into the digital future. 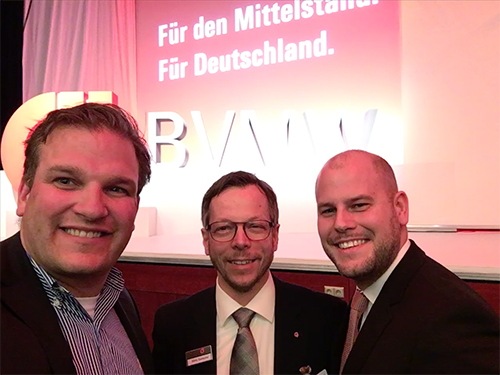