Startseite » Newsroom » Blog » Have you got the hang of digitization? – etventure starts a large-scale marketing campaign

Have you got the hang of digitization? – etventure starts a large-scale marketing campaign

Have you got the hang of digitization? – etventure starts a large-scale marketing campaign

What does digitization really need? Digitization does not need consultants, it needs entrepreneurs, because: “Only true entrepreneurs drive digital change.” With this claim, etventure started a large-scale communications and marketing campaign last week. It includes both advertisements with inserts in well-known business media as well as an advertisement in numerous large out-of-home media surfaces as well as an online presence with a competition. 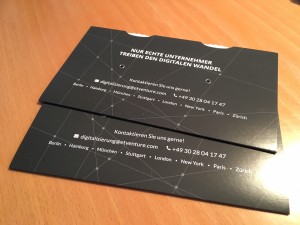 By focusing strongly on the entrepreneurial approach and the “can-do mentality”, etventure clearly distances itself from digital agencies, businesses acting solely as incubators or accelerators and above all from traditional business consultancies. The central positioning of etventure, “Only true entrepreneurs drive digital change”, is now being communicated to the outside world as part of a large-scale marketing campaign. Instead of the endless slide shows and purely theoretical strategic papers that companies tend to receive as project results from their consultants, companies who work with etventure can expect a truly entrepreneurial mentality, practical project execution, and quick, real-life results – live in the marketplace. With the help of a flyer in the form of a rotating disk which was thought up and designed in-house, the fundamental difference vis-a-vis the traditional consultants will be demonstrated in a playful manner.

The rotating disk-flyers are, together with advertisements from etventure, in the current editions of the well-known business media Handelsblatt magazine, Manager Magazin and brand eins. Furthermore, the rotating disk-flyers will be placed in the first-class carriages of Deutsche Bahn’s trains throughout the month of May. From mid-May, the campaign will also be continued with an advertisement on numerous placard-sized surfaces in a total of nine German cities.

The campaign is accompanied by online content at www.etventure.com/unternehmer – including a digital version of the playful marketing campaign. Users who have “got into the spin of things” also have the chance to win an “etventure startup Hackday” worth EUR 17,000.00 for a team of up to 20 people. The HackDay consists of interactive workshops and discussion groups that are led in partnership with digital experts from etventure. There will be the opportunity to experience innovation culture, find out about the experiences of successful and unsuccessful digital projects, and learn about real-world best practices.

Online participants have the opportunity to take part in the competition and win an “etventure startup Hackday” in Berlin until June 30, 2016.