Every year, the Founders Career Day of WHU – Otto Beisheim School of Management brings students together with alumni who have founded companies themselves or work in leading positions at startups and company builders. During the event, alumni introduce themselves and the work of their companies, which allows them to attract the attention of talented young newcomers who are still in school. In all, 15 companies took part in the event, including etventure.

The career fair celebrated its fifth anniversary at the end of 2015. With this particular format, the business school is emphasizing the high status of entrepreneurship and acknowledging the many startups successfully founded by WHU alumni. During the “speed dating” session, students had the chance to talk with the various representatives of participating companies and make new contacts. There was also an opportunity to address future cooperation, internships, or theses.

“The event was a complete success for us,” says Carolin Kröger, WHU alumna and principal at etventure, as well as managing director of the newly founded W&W Digital GmbH. “With our combination of entrepreneurship and consulting, we really struck a chord with the WHU students. We’ve raised awareness of etventure among the top talent there, and the first applications have already come in.”

At the Founders Career Day, the etventure team had a booth that offered visitors the chance to try on an Oculus Rift headset and experience a 360-degree 3-D roller coaster ride. 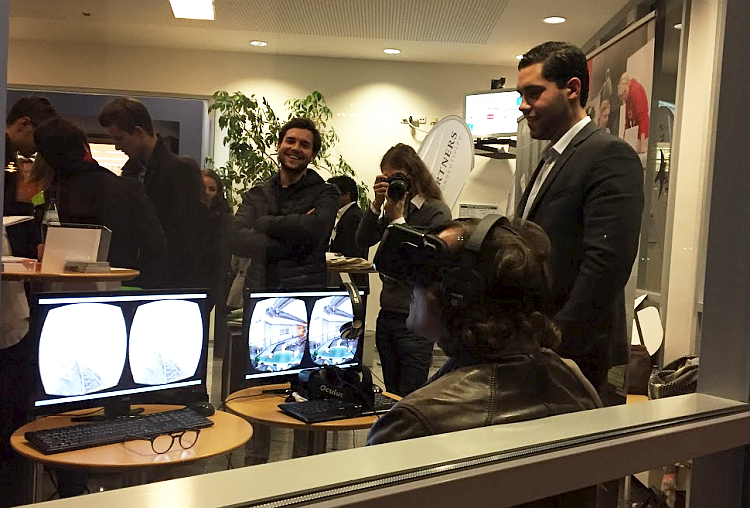 A student in the etventure roller coaster — with Oculus Rift.

Well-known founders and graduates of WHU (which stands for Wissenschaftliche Hochschule für Unternehmensführung) include the founders of Zalando, Robert Gentz and David Schneider, Philipp Justus, managing director of Google Germany, Austria and Switzerland, and Oliver Samwer, cofounder of Jamba! and Rocket Internet. In addition to etventure, the participating companies included startups like barzahlen and Outfittery, as well as company builders Project A and Rocket Internet. The WHU alumni Carolin Kröger and Jörn Soyke attended the event in behalf of etventure.