Eric Migicovsky’s aim was to earn 10,000 dollars within 37 days. Instead, he earned 10,266,845 dollars – in the same time period. He had already amassed the ten thousand after two hours. Migicovsky, now aged 30, discovered the smartwatch long before Apple and the rest were in the market, and thus achieved his dream overnight. But this success story is not an isolated case. There are many comparable ones. Felix Plötz reports on the factors behind such success stories.

“Collaborate on something big” 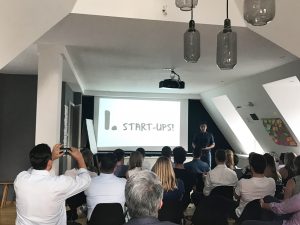 Felix Plötz looks into the faces of many eager listeners in a completely full conference room. “Who in this room is aged between 20 and 30? And who works every day with people who are aged between 20 and 30?” he asks. 100 per cent of etventure’s staff can at least answer “Yes” to the second question. This age group is what is meant by “Generation Y”. It stands for flexibility, a creative way of working, and the desire to do useful work and exploit potential to the full. “Collaborate on something big” and “don’t just live to work” are their vision. But what is really behind this generation? Felix Plötz is an author, entrepreneur and representative of Generation Y. He is a visitor at the twelfth “Mega Talk” at etventure’s Munich office, as he knows exactly what you need to set up a young company in order to live out your dream.

Success stories like that of smartwatch founder Eric and others can, according to Plötz, be viewed as a success factor. Another example is: If you were walking through the bus station in a large city, would you notice that almost all buses are now green? “MeinFernbus” and “Flixbus” are some of these. Long-distance buses are on the roads all over Germany, and soon perhaps even over the whole of Europe. They are simple to book online and their low prices result in satisfied passengers. The sucess story of “MeinFernbus” started in a very small way as an idea in the kitchen of the shared flat of two students – Torben Greve and Panya Putsathit. Now the bus company has joined forces with its erstwhile competitor “Flixbus”. Within a few months, the whole thing got so big that it would be difficult to imagine the streets without these green giants. 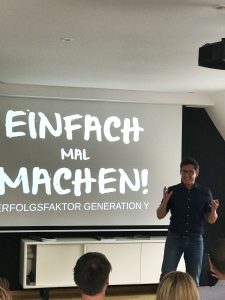 What motivates this generation?

In his presentation, Felix Plötz shows Maslow’s hierarchy of needs. “Self-actualization” is at the top. “But what does self-actualization mean?” he asks the assembled company. Developing your own personality by using your talents and opportunities could be one definition. However, this very static pyramid should be dynamic instead. Because needs would connect and overlap. According to Plötz, three things are also important in order to achieve self-actualization. You need to be self-determined, entrepreneurial and live out your dream initially alongside your job. Hastily resigning from your job is precisely the wrong way to go. But a small element of craziness is beneficial for establishing a startup and this certain degree of craziness and creativity can also be recognised in this generation. “Because only if you are a little bit more daring than the rest and “just do it” will you also manage to turn your idea into reality.”

The “Mega Talk” is held by etventure on the first Thursday of each month to discuss and then exchange ideas on exciting and relevant issues from the fields of digitisation and startups. External guests are generally welcome. If you are interested in attending the next presentation, send an emailto: kontakt@etventure.com.

Big Data, Artificial Intelligence – terms that have dominated the business world for quite some time and which, among...
Read all articles