Hardly any other German company had more negative press coverage in recent years than VW. Europe’s largest car maker is still struggling with the effects of the Diesel scandal. At the same time, the automotive titan still needs to face an entirely different challenge: digitization. How do you bring a corporate group such as VW into the digital age? How does the Wolfsburg-based company position itself to compete against companies such as Tesla or Uber? Johann Jungwirth, Chief Digital Officer at VW, provided answers to these questions last week at the first etventure Fireside Chat which was hosted by etventure Principal Lars Lüke. With its “Fireside Chat,” etventure has created a format where topics related to the issue of digitization can be discussed in an intimate and relaxed atmosphere.

“We’re going to make the transition” 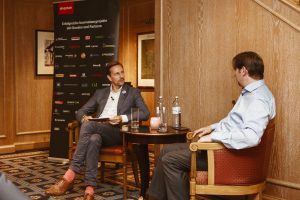 The fact that German’s flagship industry – car makers – is a little behind in the area of digitization is not a secret. That isn’t only the case for VW, but for Daimler or BMW too. In the areas of electromobility and autonomous driving, competitors from Silicon Valley or China and Japan appear to have the lead over Germany. Nevertheless, VW-CDO Johann Jungwirth expressed optimism at the Fireside Chat. “We’re going to make the transition from combustion engine to electric motor in any event. The transformation underway here now is tremendous.”

In any event, on the topic of digitization a great deal has transpired at VW since it hired Johann Jungwirth some one and a half years ago. In September 2015, VW CEO Matthias Müller – then still head of Porsche – stated that autonomous driving was a hype “that can’t be justified by anything.” In the meantime, a significant change of opinion can be seen in Müller and the VW board level. The automotive group is getting serious about the issue of digitization with the Strategy 2025. Adapting the core business to the mobility of the future, developing and expanding new technologies and ultimately a profound cultural change within the entire company. That is in large part the work of Johann Jungwirth.

From Silicon Valley to Wolfsburg 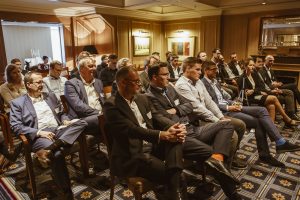 Group CEO Müller enticed him to leave Apple and join the VW group which was then experiencing probably the biggest crisis in its history. From Silicon Valley to Wolfsburg? That may sound strange to some. For Jungwirth it was a logical step: Educated as an electrical and automation technician, he is a real “car guy” and had previously spent 20 years working at Daimler – from his dual-track course of studies to Mercedes-Benz head of development in the USA.

The fact that he ultimately went to VW had a lot to do with a press release from the supervisory board that had been issued a few days earlier. The press release stated that digitization and the topic of “connected cars” were to become key pillars of the company’s strategy for the future. “When I read that I thought: That could be my job,” recounts Jungwirth. Not even the Diesel scandal could deter him: “I’m convinced that crises in particular present enormous opportunities for transformation. At VW, I have the feeling that I can really change something.” 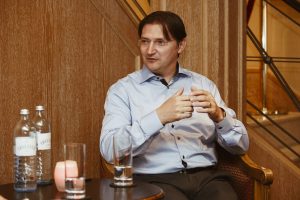 As CDO, he is not only responsible for digital transformation and innovation within the core business at VW, but he also drives disruption, the development of new digital business unrelated to the core organization. A huge undertaking. Jungwirth has set ambitious goals in other areas as well. “My clear goal is to bring our first self-driving vehicles to market by 2021,” he explains. He is not afraid of competitors like Tesla: “We will have overtaken Tesla in the pure e-vehicle segment by 2025.”

The future will show whether Johann Jungwirth was right. However, there is no doubting his expertise and enthusiasm for digitization and mobility of the future at the Fireside Chat. If VW does not succeed in its digital transformation efforts the fault will probably not lie with Johann Jungwirth.

A video of the complete Fireside Chat is available on the etventure Facebook page.