What level of importance do German companies assign to digital transformation and how is digitization being executed? These are the questions that were investigated in the survey of Germany entitled “Digital Transformation and Collaboration with Startups in Large Companies,” which was conducted by etventure with the assistance of the GfK market research institute in Nuremberg. The survey found that many companies still do not fully recognize how important digitization is. These businesses are often creating obstacles for themselves due to mistakes being made in the areas of management and execution.

Digitization is being undervalued 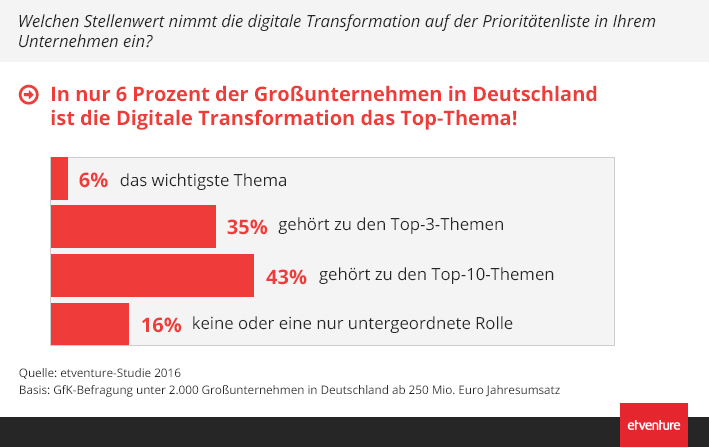 In principle, one in four companies indicate that digitization has “vastly increased” in importance over the last twelve months. Yet digital transformation is only the most important topic for six percent of the companies surveyed and it only features in the top three topics for another 35 percent of respondents. This shows that the scope of the changes brought about by the digital revolution is clearly still being underestimated and that digitization tends to be treated as a secondary issue. The amount of money that a company spends on digitization projects is always a clear indicator of its relative importance within the company. This is another area in which the findings are loud and clear. Only 14 percent of the companies surveyed indicated that they have needed to postpone other investments due to digitization.

German companies can also find it difficult to execute digital transformation. One key reason is that digitization often lacks clear, consistent leadership. Indeed, the process of digital transformation is only headed up by the board of directors or the management board in less than half of the companies surveyed (48 percent). Philipp Depiereux, Founder and Managing Director of etventure, makes the following comment about this finding: “Digital transformation intervenes in every business process and in the company’s culture. Changes as broad as these can only be pushed through by the company’s management team. Digitization cannot function without the full backing of management.”

Instead of making it a key focus at managerial level, in nearly three quarters of companies (75 percent), digitization is being supervised by the organization’s own business development team or IT department. Depiereux thinks that this is the wrong way to approach it: “The existing structures within the IT department, or other departments, are an obstacle to innovation. Instead, there is a need for a protected space in which innovations are liberated from the organization’s structure and can be developed and tested.” 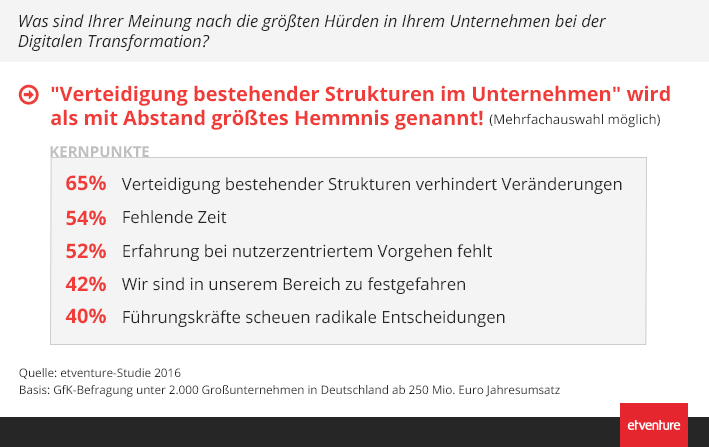 In this respect, it is hardly surprising that 65 percent of companies cite the “defense of existing structures” as being a major obstacle to the digitization process. Companies also struggle to execute digitization projects because they lack time (54 percent) and do not have the necessary experience (52 percent). This is another area where poor management becomes evident, with well over 40 percent of respondents saying that managers “shy away from making the radical and far-reaching decisions that are necessary,” or that they are too stuck in their ways.

Looking to the future with optimism 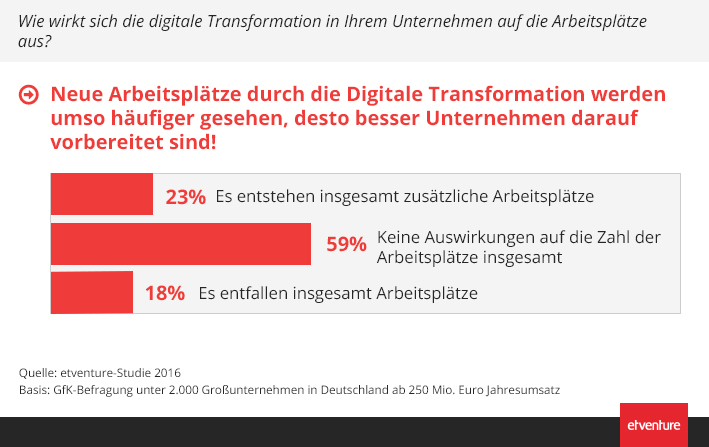 However, the gloomy forecasts about digitization causing large-scale job losses have clearly not yet become established within these companies and, in principle, they are predominantly optimistic. In total, only 18 percent believe that digital transformation will result in jobs being cut. In contrast, 23 percent expect that digitization will create new jobs, while 59 percent envisage that employment levels will remain constant or improve. The outright majority of the companies surveyed are aware that digitization will have an impact on the future of the world of work. 92 percent believe that job profiles and working practices within the company will change over the course of digital transformation.

At least every now and then, companies seek external help in order to tackle digitization – around one in three of the companies (31 percent) does so, for instance by collaborating with startups. 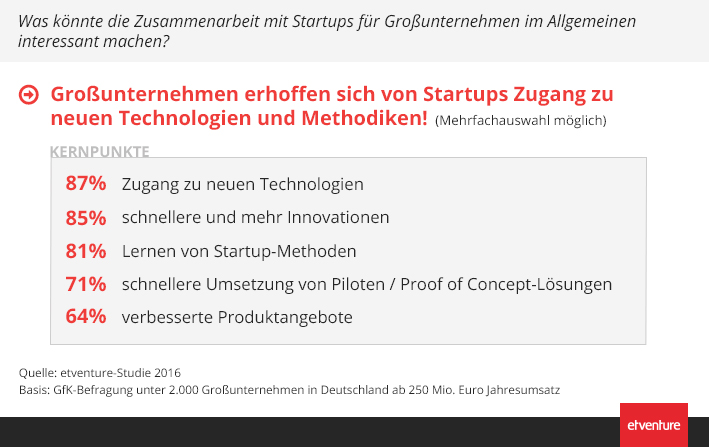 By working with startups, the main things that these companies are hoping for are access to technology (87 percent) and increased, faster innovation (85 percent). They also want to learn startup methods (81 percent) and be able to execute pilots more quickly (71 percent). Nonetheless, companies also see the problems that these partnership relationships could face, for instance due to a lack of understanding of the processes in large companies (74 percent). Critical aspects cited also include security requirements being too dissimilar (72 percent), and substantial differences in corporate culture (66 percent).

More of the study’s findings in an e-paper

The etventure study surveyed the directors, managers and managerial staff responsible for digitization at 2,000 large German companies that have a minimum annual turnover of 250 million euros. A detailed overview of the findings, along with key recommendations for executing digital transformation, can be requested via the dedicated webpage (in German). 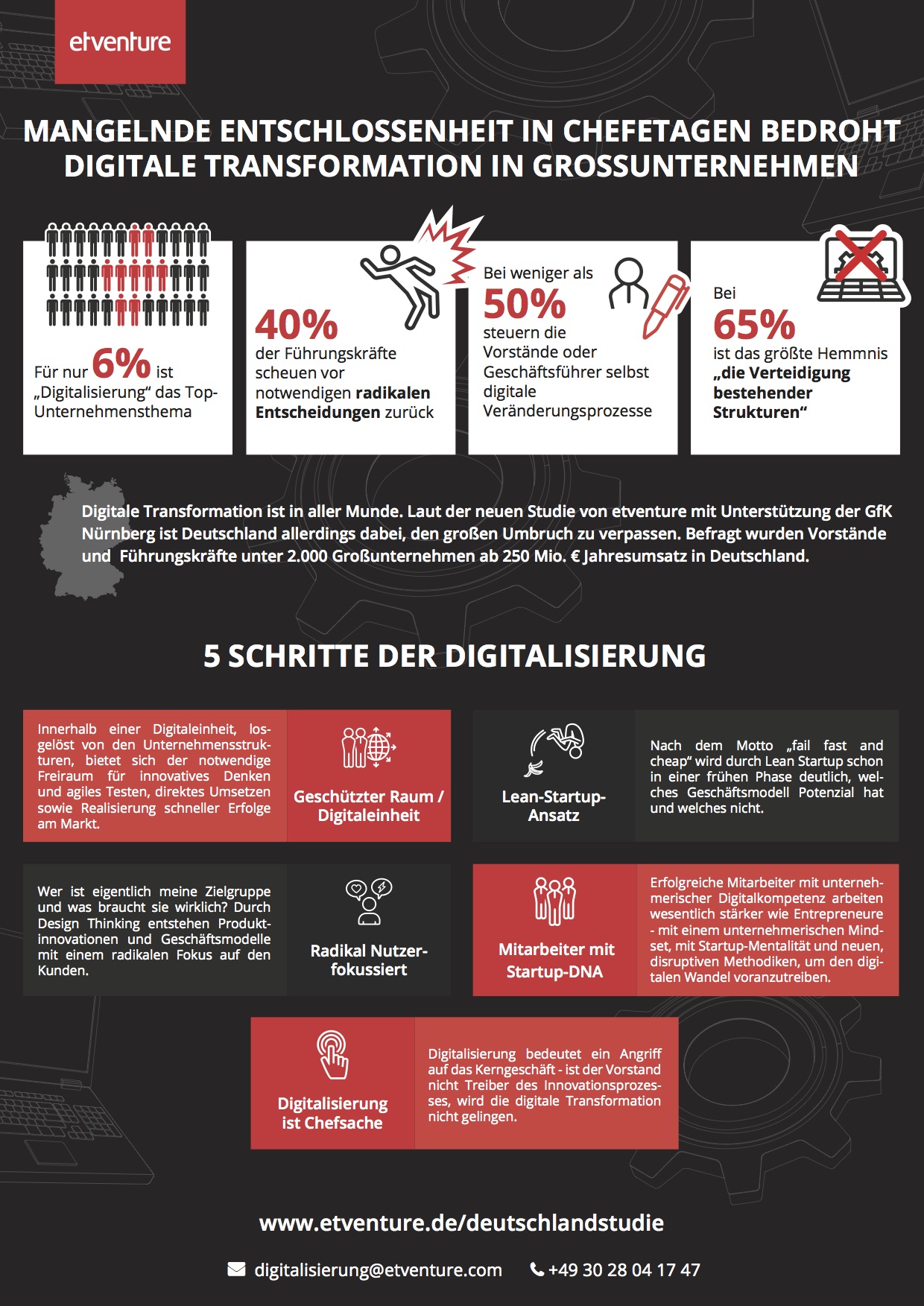