Startseite » Newsroom » Blog » Digitization and the 2.0 target group – looking back at the etventure MEGA-Talk event

In May 2016, the MEGA-Talk series of events was launched at etventure’s premises in Munich. On the first Thursday of the month, the employees gather together to discuss exciting, innovative and relevant topics, to pass on their experience and to compare notes. Last week, what was initially a purely internal series of events was opened up to external guests. Marketing expert Sven Wedig provided insights about new communication channels such as Instagram and Snapchat and about how to reach the 2.0 target group. Maren Lesche and Matthias Potthast from etventure described the ways that corporates and startups can work together and the opportunities for digital transformation that can flow from these partnerships.

Digital transformation and the human factor 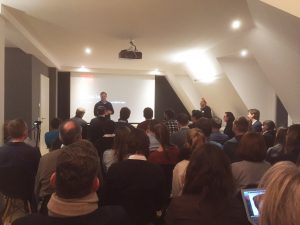 The MEGA-Talk event was attended by around 60 participants, including etventure employees, representatives from companies and startups, and students from Munich’s Ludwig-Maximilian University, who are currently enrolled on a course that is being taught by etventure. Following a greeting from Founder and Managing Director of etventure Philipp Depiereux, the company’s Communications Manager Maren Lesche and Project Manager Matthias Potthast discussed the contexts of digital transformation. When it comes to digital transformation, the human is the trigger and the key factor. The two speakers used examples such as Airbnb and Freeletics to demonstrate the change in customer requirements. They explained that the human, as the user, is the driving factor behind the changes and transformations. Nowadays, innovations become established much faster than they did a few years ago. For example, the telephone took an unbelievable 75 years before its technology reached the mass market. Today, an app may take less than a month to win over the same number of users. The speed of adaptation is so much higher than ever before. At the same time, technologies are becoming obsolete much more quickly. Product cycles are becoming shorter.

In this context, digitization has huge potential. If these opportunities are exploited, Europe’s GDP could increase by 2.5 trillion euros by 2025. For this to happen, companies will need to seize these opportunities, adapt existing processes, introduce digital technologies and restructure entire business models. Yet many companies are not aware of how extensive the transformation really is. Many simply cannot comprehend that their tried and tested business models will not be profitable forever, especially when the current economic situation is good. Nevertheless, examples such as Kodak and the mail-order company Quelle show how quickly business models are being ousted by new competitors and vanishing into thin air.

Innovation strategies: from corporate VC to growing the company’s own digital unit 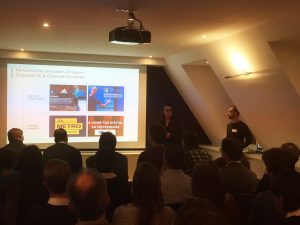 If companies are to master digital transformation, they must break the mold. Existing working methods, processes and assets are becoming less important and can even hinder the transformation. This makes it all the more important for companies to step down from their ivory towers and collaborate with startups. Typical strategies are to support startups by providing corporate venture capital or by offering accelerator programs. Yet in and of itself, providing finance does not help companies to ‘catch’ the mentality or methods of these startups. This is why the more promising approaches include innovation strategies such as co-working, Corporate meets Startup programs or founding the company’s own digital unit, which was the method used by etventure’s client Klöckner & Co. 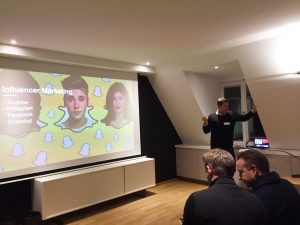 At the MEGA-Talk, Sven Wedig revealed how to address users in the digital era. He is the founder and CEO of Vollpension Medien, an agency that focuses on influencer marketing. In his talk entitled ‘Change of Perspective 2.0,’ he demonstrated that when it comes digitization, it is important to see and understand the target group behind the products. “The product isn’t the star of the show, the target group is.” He used the example of the announcement of the new pope to illustrate the rapid, intense impact of digital transformation in our daily lives. Although in 2008, the crowd at St. Peter’s Square were watching in awe as the white smoke rose from the chimney, in 2013, there was hardly a single spectator that wasn’t using their phone to photograph or video the moment. Although the devices are changing, the most important changes are in the people and their behavior. “The target group is on the move,” he says, and things that were unimaginable a few years ago are becoming the norm.

New user behavior and new digital channels such as YouTube, Snapchat and Instagram provide companies with opportunities to address the target group in a more acute yet more authentic way. One option here is influencer marketing. Testimonials from well-known figures such as Justin Bieber mean that the associated image factors rub off onto the company’s own brand. Companies are also able to reach the figure’s social media followers, who can no longer be reached by conventional mass media.

The MEGA-Talk event was followed by a get-together with all of etventure’s Munich-based employees and the external guests.