Digital transformation: clear shift in awareness in Germany, but implementation too slow and inflexible – significantly behind US corporations

Startseite » Newsroom » Press releases » Digital transformation: clear shift in awareness in Germany, but implementation too slow and inflexible – significantly behind US corporations 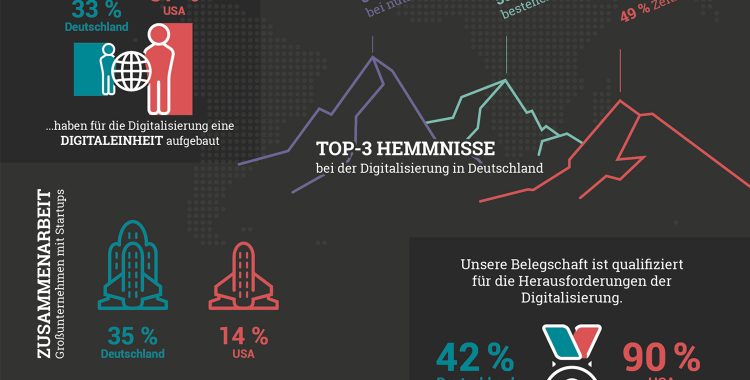 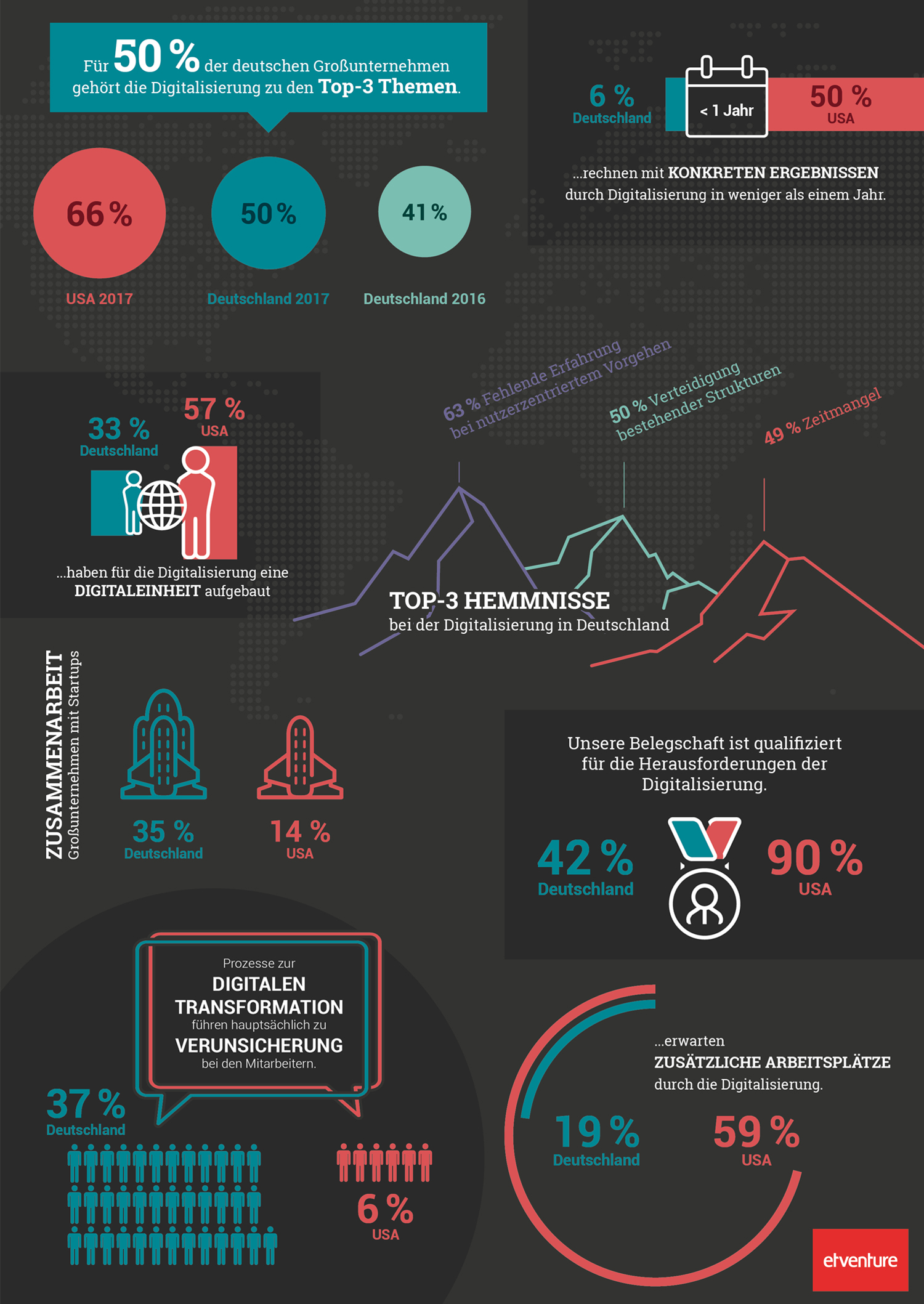 Berlin, 9 March 2017 – The significance of the digital transformation has now been largely recognised by German corporate executives. In one third of companies with turnover of more than EUR 250 million (35 per cent), the process is being managed directly by the board. According to the preceding etventure study, in 2016 this was the case in only 24 per cent of all companies. Furthermore, digital transformation is now one of the top three corporate objectives in exactly 50 per cent of large companies (2016: 41 per cent).

However, at the same time, we can see a significant gap compared to the USA. Firstly, companies there attach fundamentally greater importance to digital transformation, with digitisation already being one of the top three objectives in two thirds of large US companies (66 per cent). Now more than twice as many US than German companies already consider themselves to be ‘well’ or ‘very well’ prepared for this issue (USA: 85 per cent, Germany: 35 per cent). In addition, the overwhelming majority (90 per cent) of US companies consider their staff to be qualified to handle the digital transformation – rather different to those in Germany (42 per cent). US corporations are also setting a different pace for implementation. Half of all US corporations expect the digital transformation to impact on market share or sales in less than one year – whereas only six per cent in Germany are of this view.

These are the key findings from a representative survey of large companies in Germany and the USA with annual turnover of at least EUR 250 million or USD 250 million, respectively, which was carried out by etventure in collaboration with GfK in Nuremberg and YouGov USA. It is linked to a study carried out in the previous year; however, this year the survey included the US market for the first time.

Lack of experience is the biggest obstacle to digitisation in Germany

“The etventure study shows that, in 2017, the issue for German senior executives is no longer whether the digital transformation is ‘important’ or ‘very important’ for their own core business – which is a very positive thing for the German market to recognise,” explained Philipp Depiereux, founder and CEO of digital consultancy and start-up designers etventure. “Nevertheless, most German companies haven’t yet succeeded in communicating this information across the entire core organisation and motivating staff to deal with digitisation. This is a risky position in terms of the gap in developing digital business models compared to the USA.”

In the etventure study, one third of large German companies (31 per cent) actually describe themselves as being inflexible and too slow to react to the requirements of digital transformation. In the USA this figure is just seven per cent. At 63 per cent, the majority of all large German companies surveyed also see the ‘lack of experience in user-centric ways of working’ as a major obstacle (2016: 52 per cent). In the USA this is the view of only 14 per cent. ‘Defending existing structures’, which was by far the most frequently mentioned obstacle in 2016 at 65 per cent, was actually mentioned less often in 2017 but is still a problem for half of German companies (USA: 28 per cent).

“The fact that internal resistance is considered to be a problem far less often in the USA is one of the reasons why more than half of large US companies (57 per cent) already have a digital business unit,” said Philipp Depiereux. “In Germany the figure is only one third (33 per cent). But to be able to show tangible results within just a few weeks, initial activities need to take place in a ‘safe space’, e.g. a separate digital unit. The initial successes from a digital unit of this kind then act as an initial spark and must be used actively for this purpose in order to gradually make the core organisation enthusiastic about digitisation too.”

This applies to an even greater extent against the background of another finding. According to the study, staff in more than one third of large German companies (37 per cent) are made anxious by the subject of digital transformation (USA: 6 per cent).

In Germany, one in five companies (20 per cent) fear that jobs will be lost as a result of digitisation. Almost none of the large US companies surveyed expressed this view (4 per cent).

Instead, six out of ten US companies (59 per cent) expected digitisation to result in a growth in jobs – whereas in Germany this was the view of only two out of ten (19 per cent). “This leads us to the view that, in Germany, digitisation is mainly linked to process improvement and efficiency gains, whereas in the USA it is also associated with growth due to new digital business models,” said Philipp Depiereux. “Furthermore, in the USA more than twice as many companies (and, at 90 per cent, almost all large companies) consider their staff to be qualified to deal with the challenges of digitisation. In Germany, the figure is only 42 per cent. This means that the majority of 58 per cent assume there is a lack of the necessary skills.”

US companies are thoroughly aware of the impact of digitisation on their employees. More of them consider that digital transformation measures will impact on over half of the employees in their corporation than do large German companies (USA: 66 per cent, Germany: 44 per cent). In order to close these skills gaps, companies in both countries are obviously relying on training measures (Germany: 98 per cent, USA: 99 per cent). However, if their employees do not have sufficient skills, fewer German companies overall want to make people redundant than those in the USA (Germany: 23 per cent, USA: 31 per cent).

At first, this finding from the study is surprising. Large German companies are now collaborating with recent start-ups three times as frequently as US corporations (Germany: 35 per cent, USA: 14 per cent). The aim of this collaboration is mainly to develop “faster innovations” and obtain “access to new technologies”. While almost 90 per cent state this objective, the figure is far lower in the USA, at 60 per cent. Only 32 per cent of US companies want to outsource their research and development to start-ups – whereas in Germany it is almost twice as many (47 per cent).

“Looking at the overall findings and the comparison between 2016 and 2017, this is an extremely positive development for Germany,” summarised Philipp Depiereux. “The problem is that digitisation is still considered by senior executives to be a risk rather than an opportunity. That obviously makes it difficult to get going with implementation quickly. In order to be able to keep up with the USA, companies must first invest in training their staff. It is also particularly important to create new structures, such as a safe space in which new ideas can be developed and tested. Because, if success can be proved in small measures, it will be significantly quicker to bring digital solutions back into the company and create the openness across the whole organisation that is required for digital transformation.”

Based on the questionnaire prepared by digital consultancy and start-up designers etventure, GfK Nuremberg and YouGov USA conducted simultaneously in Germany and the USA a telephone survey of large companies with annual turnover of at least EUR 250 million or USD 250 million, respectively. The survey was conducted on the basis of 294 face-to-face interviews (Germany: 135, USA: 159) in the period from 28 November 2016 to 24 January 2017. Respondents were decision makers concerned with the issue of digital transformation in the respective companies. Further details about the study can also be found at https://www.etventure.com/innovationstudies/.